I ate thrice in a row: the Bombay Burger, India’s favourite quick meals – plus the recipe | to eat and drink

M.Umbai was the first stop on an eight-month trip around the world that I went on with my husband in 2014. The longest time I’d previously been outside the UK was three weeks. I had only visited three places outside of Europe so far, and it took me a full year to convince my other half to join me. And our main goal for these months on the road? Eat.

We plunged into the depths and started in Mumbai. It is so big and spacious that one can hardly assume that the whole country has to be in this city alone. It was at least ten times as lively and chaotic and exhausting as I expected it to be. Mumbai offers a relentless onslaught on all the senses, especially hearing: the honking of the horn doesn’t stop. 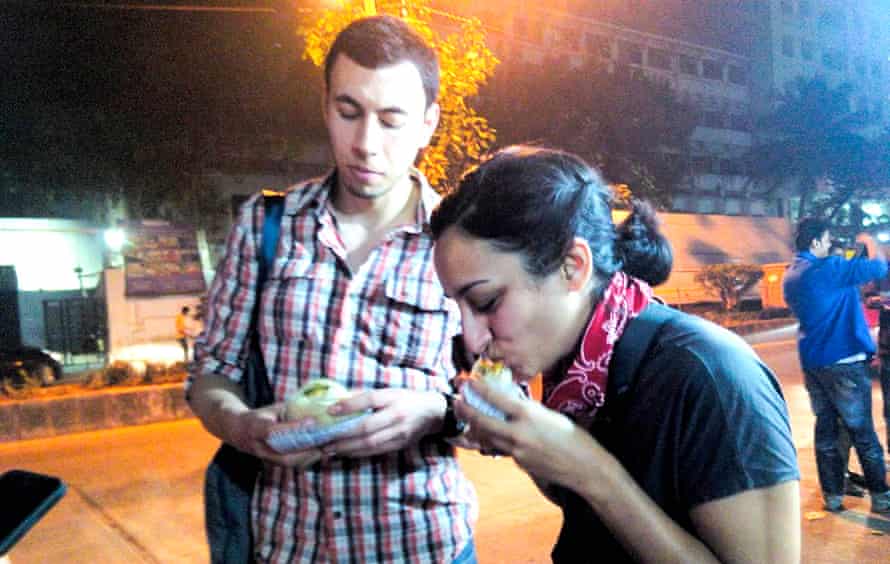 Leyla Kazim and her husband eat Vada Pavs in Mumbai

I knew there was going to be a kaleidoscope of amazing food in Mumbai, but where would a tourist even start? To help us cut the city’s restaurants down to a handful that couldn’t be missed on a first visit, I hooked up with three local food bloggers – Sameer, Jahan, and Jagruti – and spent a spectacular evening in Shoot a rickshaw through town and continue browsing some of the tastiest bites in town.

We scooped up Raj Kachoris at Elco in the upscale Bandra neighborhood. These are big puris loaded with yogurt, chutneys, bean sprouts, chickpeas, potatoes, and fried crispy pieces that are impossible to eat in a bite.

One of India’s most popular fast foods is the vada – a deep-fried, crispy ball or patty. In Prakash in the busier Dadar, we paused to prepare crispy sabudana vadas, a mixture of soaked tapioca pearls, potatoes, ground peanuts, chilli, coriander and lemon juice that were rolled into balls and then fried.

But all of my excited anticipation was reserved for Vada Pav. I had come to Mumbai to familiarize myself with the city’s most popular street food and was dying to try what bloggers thought were the most superior examples.

Vada cobblestones come from Maharashtra, the large western state whose capital is Mumbai, and are sometimes referred to as Bombay burgers. It’s quick, cheap, and comes in a bun – but I’d have this vegetarian snack over a burger most days.

The spicy potato balls are coated with grams of (chickpea) flour, deep-fried and served with at least one hot chutney – often a garlicky green – in a soft bun with a bubbly green chili. They’re salty, flavorful, extremely satisfying, and the cheapest we’ve had in town. Thirty rupees (about 30 pence) for two.

In Mumbai and beyond, there are vendors hurling these on every street corner, but only about five stalls do them really well. We had ours in the northwest of the city, from Dhiraj Vada Pav, a few blocks from the beach in Juhu, across from the renowned Mithibai College. Fresh off the fryer and still too hot to handle, they were a strong contender for my favorite thing to come off my lips during the entire five weeks I spent in India. I think I ate three in a row. 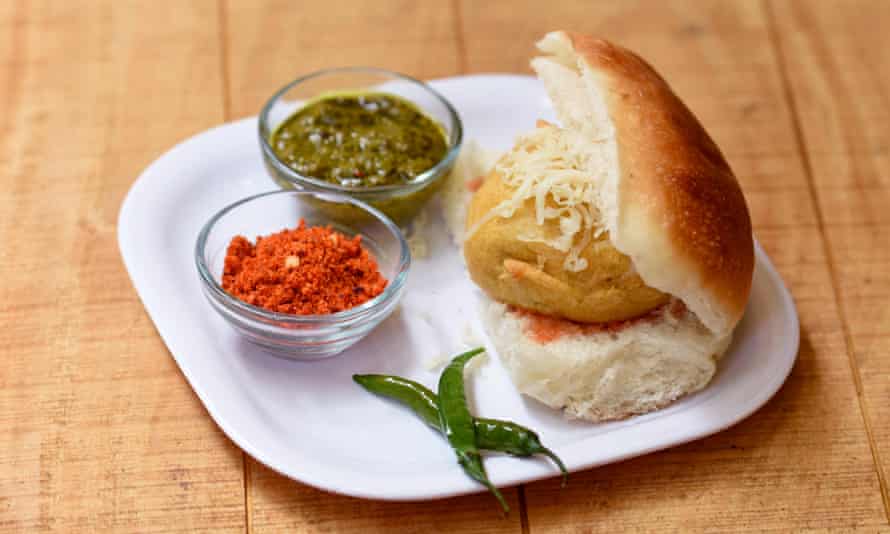 Make the chutneys first. For the green, mix the mint, coriander, chili peppers and ground almonds, add a little lemon juice and flash. Keep adding lemon juice until you have a spreadable consistency – it shouldn’t be too wet. You may not need all of the lemon juice. Add salt if you like.

For the red chutney, roast the coconut in a dry pan until it takes on a nice color, combine with garlic, chilli powder and a pinch of salt and then pound with a pestle and mortar. If necessary, add a splash of water to loosen the mixture slightly – it should be dry and crumbly. Set both chutneys aside.

For the potato balls, heat the oil in a pan over medium to high heat. When it’s hot enough for a mustard seed to sizzle, add the rest of the mustard seeds and the asafoetida. When the mustard seeds pop vigorously, reduce the heat to low to medium and add ginger, garlic, and chili peppers. Cook for a minute, then add the turmeric and cook for another minute.

Weigh the total amount of potatoes and divide that number by six so you know how much each serving should weigh – mine were about 75g each. Measure out six portions and roll them into balls with your hands. Put aside.

To make the dough, combine the gram of flour with the turmeric and a pinch of salt. One at a time, add the water and mix with a whisk until you have a smooth and fairly thick batter. Put aside.

Fill a thick-bottomed saucepan with enough sunflower oil to reach the vada balls halfway up. Heat on medium to high heat. To test if the oil is hot enough, add a little batter. When it sizzles and cooks to a golden color, it’s done. First drop in the six finger chillies. When they are boiled and have bubbles, remove them and drain them on paper towels.

Coat each ball with the batter and carefully drop it into the hot oil. Turn the ball around in the oil until the whole is cooked and golden. Remove with a slotted spoon and drain on kitchen paper. Repeat for all balls.

To serve, cut each roll in half and brush with butter if desired. Spread some green chutney, add a vada ball, some dry red chutney and deep fried chilli and devour.

Leyla Kazim is one Moderator on BBC Food 4 The Food Program and a digital creator who specializes in travel and food. Follow her on social media @thecutlerychronicles and @leylalaa

Take a look at the New Tobacco Highway Tribute Bar, which is now open in Brickell